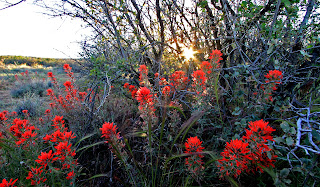 It looks like wild flowers will be less abundant this spring and summer. The east side of Bradshaws has an abundant Indian paintbrush population in certain areas.

A cold and snowy December held promise for a much needed wet winter with at least average precipitation. However dreams of flowing streams and lush spring vegetation are rapidly fading as Bradshaw Mountain Country suffers under a strong La Niña weather pattern. January and February 2012 have been two of the driest months on record in central AZ. Climatologists tell us that cold currents in parts of the Pacific cause the moisture laden jet stream to track well north of AZ. This causes heat trapping high pressure to build and hold over the southwestern US. Ridges of high pressure push vital winter precipitation away. 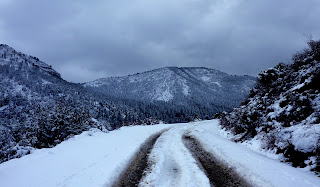 March and April still may bring the Bradshaws a drink but we can only hope for that now. What does a La Nina mean for the Bradshaws and its wildlife? Well the good news is that the Bradshaws are a desert adapted mountain range whose ecosystems have been forged and honed under millennia of warm dry, unpredictable conditions. In the long term its systems are incredibly resilient and they will survive and thrive. In the short term however observers may notice effects such as less available surface water and fewer spring flowers and less green vegetation growth. This lack of primary production may result in below average quail breeding success and brood production. Mule deer may be slightly malnourished, resulting in decreased fawn survival. 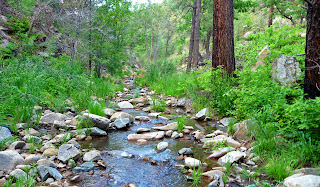 Creeks may be drier this spring in the Bradshaws. Turkey Creek.

Small mammal populations may decrease and populations of their predators may temporarily decrease proportionally. The more desert adapted the less a species will be affected by a drought. Animals like Ord’s Kangaroo Rat may never drink water. They are able to synthesize water from seeds they forage on. Southwestern eco systems live on the edge. They are however poised to take advantage quickly of resources when they become available.
Stay tuned we’ll continue to monitor the Bradshaws and keep our fingers crossed for the gift of a spring blizzard or two. 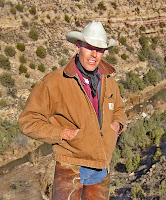 Scott Poppenberger has recently joined the Bradshaw Mountains.com. He works for the Arizona Game and Fish Department as a wildlife manager and patrols and conducts biological research in the Bradshaws. For more information about Scott visit our about us web page.


Posted by Bradshaw Mountains.com at 10:44 AM